The security of your account information is one of The Dime Bank's top priorities. Our experienced team of professionals monitor your accounts and safeguard your information with state-of-the-art fraud prevention systems.
In addition, arming yourself with knowledge and monitoring your accounts on a daily basis are two ways you can assist The Dime Bank in protecting your financial information.
Please take a few moments to read and implement these important security tips.
January Newsletter security tip
Data Privacy Week Starts on January 24th
Data Privacy Week starts with an international effort to empower individuals and encourage businesses to respect privacy, safeguard data, and enable trust. The Dime Bank wants to help you keep your information safe. Protecting your personal information is a shared responsibility. Here are some tips to help you protect your data:
protect your information - best practices
The Dime Bank wants to help you keep your information safe. Protecting your personal information is a shared responsibility
Verify it's The Dime Bank. Fraudsters pose as credible companies "phishing" for your information. The Dime Bank will never call to ask for your online login information. If you are unsure, get the individuals name and hang up and call your local branch.
Do not open suspicious texts or emails or click on links within them. Fraudsters impersonate companies to get consumers to click links and provide personal information. Clicking on links can also infect your device with malware.
A password is the first line of defense against cybercriminals. We recommend creating a complex password that is difficult for others to guess but easy for you to remember. Use a different password for each site.
Monitor your accounts regularly, respond to fraud alerts, and report unauthorized transactions promptly.
protect against ransomware
Ransomware is a type of malicious software, or malware, that prevents access to computer files, systems, or networks and demands a ransom payment for their return.
The simplest way would be to avoid internet connectivity. LOL. Right! As that is not practical in our connected world today, what else can you do?
Auto-install updates. One of the most important controls to protect against ransomware is updating your devices and apps, including browsers (ie: Internet Explorer, Chrome, Edge, etc).
Most software companies regularly release updates for security loopholes. Computers and laptops are configured to scan, patch, and update automatically. Unfortunately, not applying the updates leaves you open to attack. Many ransomware and other malware attacks take advantage of out-of-date software.
One of the most common ways that computers are infected with ransomware is through social engineering. Remember to exercise common sense with suspicious email, websites, and other scams. If it seems suspect, it probably is.
creating the best password

Be unpredictable. There are two common password attacks, brute force and dictionary attacks. Both  involve trying a sequence of numbers and/or common words like 123456, hence, trying to crack a password using “brute force” or common “dictionary” words. To minimize this type of exposure, don’t make your passwords predictable.

Be creative. Related to being unpredictable, consider creating a phrase and use the first or second letter of each word, or substitute a special character for letters and/or numbers. You can use a password generator which provides creative and secure password options.

Be long. The longer the password, the more possible combination, and permutations of the password there are, and thereby the safer they generally are. However, don’t forget the first two tips, because long common words and sequences of numbers are still easier to crack!

Be selfish. Believe it or not, one of the more common reasons passwords are compromised is because people share their credentials. Quite simply – never, ever share your password(s)!

Be mindful. Think before you click. Phishing is where you receive an email or text message asking for you to confirm your details or take some other action where you need to enter your personal credentials. These types of acts are becoming increasingly sophisticated and can look very legitimate, like an email from someone you know. As a good rule of thumb, unless you make a request, don’t ever enter your credentials. Or, if you have any doubts, contact the organization requesting the information directly.

tips to protect your computer

Use the built-in firewall on your computer.

Turn on automatic updates for ALL software you use, including your internet browser(s).

Use antivirus and anti-malware software  and keep it current.

Browse safely.  Don’t visit illicit sites.  They may contain malware or a download that contains malware.

Refrain from streaming or downloading movies, music, books, or applications that are not from a trusted source.  Pirated material may include malware.

Avoid malware and viruses by only using external devices you own or receive from a trusted source.

Signs of a fraudulent email
Unexpected or suspicious email attachments should never be opened. They may execute a disguised program (malware, adware, spyware, virus, etc.) that could damage or steal data. If in doubt, call the sender to verify. A good rule of thumb is to only open file attachments if you are expecting them and if they are relevant to the work you are doing.
Signs of a Malicious Attachment
.exe Files: .exe files are executable files - meaning that they can run a program; while .exe files are not inherently malicious, they can be used to install malware on your computer; there's no reason for an .exe file to be shared via email, so if you receive one, you should delete it.
Unsolicited Email/Strange "From" Field: don't open attachments that you're not expecting, or from users who you don't know.
Strange "To" Field: if the email has a long, alphabetical list of recipients, or if the "To:" field is blank, then the email is probably illegitimate, and the attachment shouldn't be opened.
Vague Subject Line/Body: if the subject line or the body text is vague, then the attachment probably is illegitimate.
Missing Salutation: most legitimate emails have a salutation.
Poor Grammar/Spelling: legitimate emails are carefully proofread before they're sent out; if the email has a lot of spelling/grammatical errors it's probably not legitimate.
Sense of Urgency: (i.e. - "this attachment will expire in 24 hours”, “you have an unpaid invoice") most illegitimate emails try and create a sense of urgency so that the recipient will download and run the attachment without carefully looking at it.
Remember attackers/bad actors rely on user interaction. Their goal is to try to trick users into opening a malicious document to exploit system vulnerabilities. Stay alert, stay safe!
Don't fall for a scam
If someone says you can only pay by wiring money, putting money on a gift card, or loading money on a cash reload card - it is a scam! Whether someone tells you to pay to claim a prize, deal with tax issues from the (so-called) IRS, says your accounts have been compromised, or asks you to help someone out of trouble, nobody legitimate is ever going to say you have to pay by wiring them money or by putting it on an untraceable gift card of any type. If you comply with their request, you stand to lose a lot of money.
If you receive a phone call, text, email, or letter with this type of request, it is a scam. If someone tells you they are from The Dime Bank and you are unsure, ask for their name and phone number, hang up, and call us immediately at 570-253-1970 or toll free at 1-888-4MY-DIME (1-888-469-3463). If the call was truly from The Dime Bank, you will reach us by calling us back on our published phone numbers.
Please help us safeguard your information. We’re here to help you in any way we can.
is it really the dime bank?
If you receive a letter, a text, an email, or a phone call claiming to be from or associated with The Dime Bank but it sounds unusual and out of the ordinary, please be cautious. It's always a good rule to check with us directly to make sure the communication is truly coming from us!
Please confirm that a request asking for your sensitive, personal, or bank information, is from a Dime Bank employee. Please call our fraud department right away at 570-253-1970 x7790 to verify that it is a legitimate request. Doing so will prevent you from falling victim to potential fraud.
Shopping Securely During the Holidays
The holiday shopping season has begun and we want to share some holiday shopping tips with you to help keep your holiday shopping experience scam free.
Contact Us Securely

Find one of our several locations or ATMs nearest you. We're also only a phone call away!
Find a location

Focus on what’s important by getting your banking done easily and securely.
Choose your way 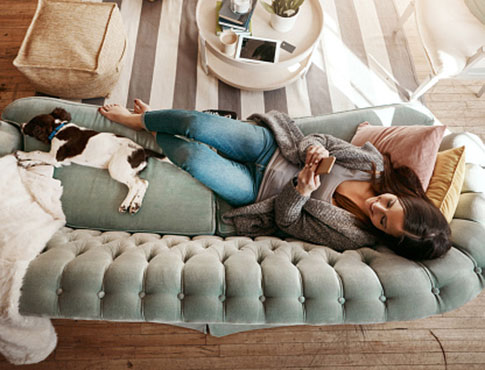 Keep up to date with us.

Learn about all of the exciting things going on at The Dime Bank with our newsletters and press releases.

Read more on our accessibility statement